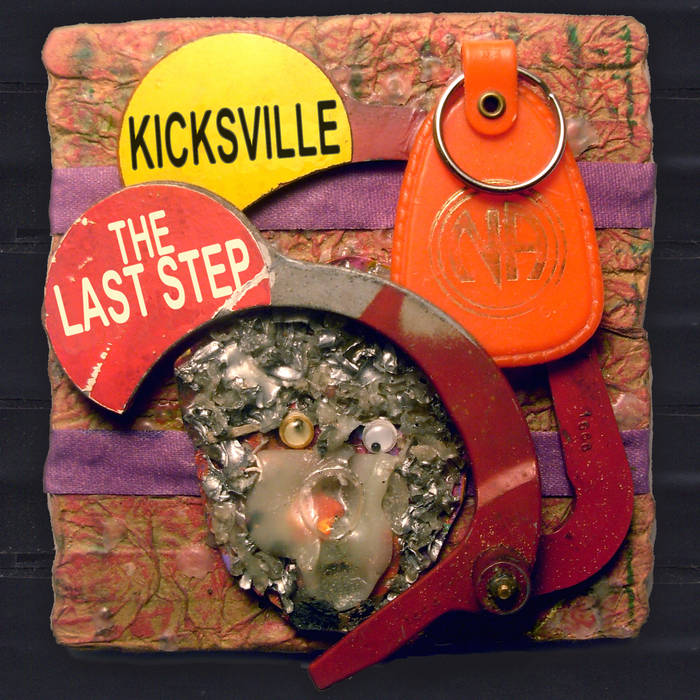 The Last Step is the closing chapter in the story of the characters first introduced in Evil Demon Weed, as told by City Council member, Tone Deaf.

Bob (the Pusher), Candy (the Evil Temptress), and Johnny (the Good Kid on the Path to Ruin) have been a big part of the growing Kicksville "mythology": they're featured on the cover on Enter the Flavor Hut, they're the thread that sews our live show together, and they're regulars in Tone Deaf's poetry.

When we last saw them, Johnny was taking his first puff of the Demon Weed, led on by Bob and his femme fatale, Candy. Now, as we catch up with them in The Last Step, Johnny has become a hopeless junkie, Candy has taken the Vows, and Bob has fallen into the depths of a drug-induced psychotic break. Fun for the whole family!

The Music
To paraphrase Frank Zappa, music without dissonance or tension is like eating cottage cheese. If that's the case, then The Last Step is the spiciest Pad Thai you ever had! Musically, this song owes a lot to Zappa's work with Captain Beefheart: check out the song Sam with the Showing Scalp Flat-top, and you'll see what we mean....

1.
the police have kicked in johnny's door for something he thought thirty years ago. johnny, more than a little paranoid by then, had departed for parts unknown the night before.

2.
unable to take the madness any longer, candy has taken the vows, and for many years has dedicated her life to the poor diseased people living at and around the crackytown mission

3.
bob is out of rehab again after doing celebrity time in jail. with a bus token and a new suit, he's sent out into the world he is ill equipped to deal with.

4.
in time, johnny has met up with a girl who leads him down the garden path once more and introduces him to her uncle, peter the dealer. johnny falls hard for both again.

5.
candy is loved by all for her tireless efforts with young and old alike. despite government program cuts and shrinking donations, candy always has time for all in need

6.
bob, who never really came down, is existing in crackytown on handouts, meetings and heroin, hanging around talking to colorful non-existents and pissing himself.

7.
one night johnny, in a meaningless drug haze looking for twenty dollars, had his throat cut from right to left in the third floor hecht co. bathroom on the outskirts of town by a gentleman well known but of questionable character.

8.
a charity dinner in her honor and cash for the cause gave candy no good reason to say no, which she was apt to do. on the drive to the mayor's reception, candy sees a man abusing himself with a wall. she stops the limo and runs to render assistance where she is promptly dispatched by a beer truck.

9.
with twenty dollars in his pocket and horror visions of the girl he once knew, bob hurls insults and acts out the brick to all who pass by. with his unholy grin and a child's mind, bob is rarely taken seriously.